The Evolution of Joel Osteen, Pastor of the Biggest Church in America

Largest Megachurches in America today, number in congregation, and pastor

Over 7 million: number of weekly viewers in Joel Osteen’s TV ministry.
More than 100: number of nations that broadcast his TV show.
1997: Married wife Victoria. They have two children, Jonathan and Alexandra.
2.5 million: number of copies sold of his first book, Your Best Life Now
Compaq Center: once home of the Houston Rockets NBA team, is now the Lakewood church. Seats 16,000.

The History of Joel

• A college dropout
• For 17 years, worked in production in the television ministry of this father
• October 3, 1999 Osteen took over from his father as pastor of their church; Lakewood church after his father passed away.
• Prior to this role he had preached only once.
• Osteen was listed amongst the ‘ten most fascinating people’ in December 2006.
• In the same year he was accorded the recognition as the most inspiring Christian in the United States.
• Does not take a salary from the Lakewood church whose annual budget is $70 million.
• Osteen’s book sales and related stuff generates a reported $55 million.

For Joel, money is the root of… Being Cool

• He is worth $ 56.5 million
• Third most popular TV evangelists, behind Billy Graham and Rick Warren
• Takes no salary
• Owns one house, the one he lived in for 13 years.
• Until recently, drove 9 year old car owned by his father.
• Pays his own hotel bills, has no private jet
• His services net $43 million a year.
• Upbeat, does not take collections at services
• $30 million: amount of annual mail donations

How Tall Is Joel Osteen?
6 feet

Other interesting facts and tidbits:
• His first five books, “Your Best Life Now,” “Become a Better You,” “It’s Your Time,” “Every Day A Friday,” and “I Declare,” have all been #1 national bestsellers.
• “Your Best Life Now” was on The New York Times Bestsellers List for more than 200 weeks.
• According to Nielsen Media, Osteen’s weekly program is watched by more than 10 million American viewers.
• Osteen’s weekly program airs in approximately 100 nations around the world.
• Osteen has filled stadiums in England, Northern Ireland, Canada, Israel, Africa and Australia.
• According to iTunes, Osteen’s weekly audio and video podcast has an average of 10.5 million downloads each week.
• In the past eight years, more than a two million people have attended Osteen’s “Night of Hope” events.
• In 2009, Osteen sold out Yankee Stadium in New York.
• Lakewood has been called “the most integrated church in America.”
• Lakewood’s 2005 grand opening was attended by Texas Republican Gov. Rick Perry as well as Democratic House Minority Leader Nancy Pelosi.
• Senator John McCain told Rolling Stone Magazine that Osteen was his “favorite inspirational author.”
• President Obama hosted the Osteens at the White House.
• In 2006, Barbara Walters named Osteen one of her “Most Fascinating People” of the year. 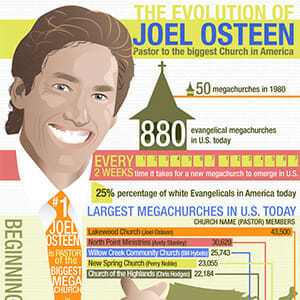