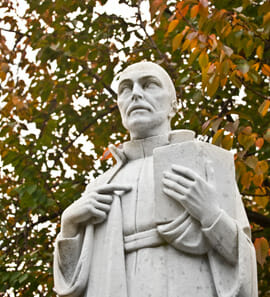 Students exploring college and university options may have come across the term Jesuit University in their research and may not have entirely understood what kind of educational institution the term described. In other words, what is a Jesuit University? The short answer is that a Jesuit University is one belonging to the Association of Jesuit Colleges and Universities (AJCU), which includes 28 schools and 2 seminaries in the United States. These schools are independent of each other, but share a set of common ideals and history.

The Society of Jesus, better known as the Jesuits, is an organization of male congregants, persons who take holy vows, that is part of the Catholic Church. Founded in 1534 by St. Ignatius of Loyola, the Jesuits have a long and sometimes stormy history relative to society and the rest of the Church, but in modern times, they are best known for teaching, for contributions to science, and for taking vows of poverty. Pope Francis, the current pontiff, is a Jesuit.

What are Some Examples of Jesuit Universities?

Jesuit universities and colleges exist worldwide, in countries as diverse as Chile, India, Sweden, and Zimbabwe. Twenty-eight of them are in the US as well, including well-known schools like Boston College, Georgetown University, Saint Louis University, and Xavier University, just to name a few. Many of them are in the Eastern US or in cities that began with large Catholic populations, but California is home to three universities with Jesuit affiliation, including Santa Clara University.

Can Only Catholics Enroll?

No, these universities are open to all qualified applicants, depending on their academic histories and other general factors related to application and admission. Many of them are quite competitive, such as Georgetown, which maintains academic standards equivalent to those found at many Ivy League schools, and Boston College. Some of the smaller colleges have less rigorous standards for admission, but only the theological seminaries’ admission processes have anything to do with religion. After all, these schools are for students wishing to enter the priesthood.

Are the Degrees Worth More or Less Than Non-Jesuit Schools?

For the most part, Jesuit Universities have good name recognition, some regionally and other nationally. Degrees from these schools are neither automatically better or worse than those acquired at public or non-Jesuit private institutions. Nonetheless, the AJCU contains a variety of schools, including some smaller colleges that may lack the renown associated with some of the previously mention institutions. In general, however, the curriculum at Jesuit schools is often perceived as tougher than that of other colleges. Many have top-rated graduate school and professional programs.

What is Student Life Like at a Jesuit University?

Many Jesuit schools have competitive athletic programs and access to the same extracurricular activities and clubs that other colleges and universities offer. A number of these colleges and universities have beautiful campuses, such as College of the Holy Cross and Gonzaga University. It is common for these institutions to place a higher value on living on campus, community participation, and social responsibility.

This should answer the question: What Is a Jesuit University? Schools that are operated by the Jesuits are varied in terms of student population, reputation, and geographic location, but in general are quite similar to other private colleges and universities in the US and abroad.