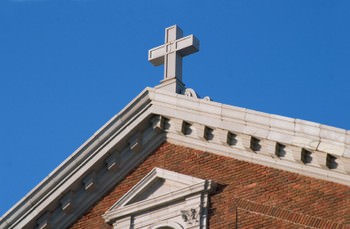 Several colleges around the country were founded by various Christian groups, and when choosing a university, a student may wonder whether Christian colleges allow students of different faith to enroll. A variety of factors influence the decision to attend college, and the depth of religious study at a college and the type of Christianity practiced may also influence whether a student sends an application to the school.

Most Schools Welcome All Applicants

Rarely do schools place restrictions on applicants regarding faith, and the majority of faith-centric schools welcome applicants of different faiths who might be interested in attending a school that designs student life within a certain facet of Christianity.

Schools connected to a Christian faith may ask in the application what, if any, religion an applicant practices, but an answer that matches the type of Christianity practiced at the school won’t necessarily guarantee admission to the college. According to an article in Forbes, many of the country’s oldest colleges were founded by religiously affiliated groups, but have since adopted a secular curriculum. In those schools, the question of faith might not even come up on an application for admission.

Christianity Within a College’s Curriculum

Schools with a connection to Christianity will usually operate in one of two ways. The school will create a curriculum that includes religious classes, or the school will operate in a more secular manner without requiring classes on religion of its students. Colleges with a heavy emphasis on faith will often require classes on the Bible.

Additionally, such colleges will also mold curriculums in such a way that they adhere to traditional religious principles within Christianity. The phrase used these colleges often features the phrase, “Christian world view,” which means the classes may take major principles of the Christian faith and include them in classroom study.

Christian colleges allow students of different faith to enroll, but may require certain behavior or activities of students that come from Christian practices. For example, some colleges require students attend Bible study or attend church services each week.

Additionally, Christian colleges often require a code of behavior of students that adheres to practices in the Bible. Students may be required to live in gender-specific dormitories, and some colleges will also ask students to read and agree to certain lifestyle choices while living on campus or while enrolled for classes.

All Christian Schools are Different

It’s impossible to label all Christian universities as the same, particularly when there are so many denominations and practices within Christianity. According to the Council for Christian Colleges & Universities, there are 120 colleges in North America that identify as “Christ-centered higher education” facilities.

Each of these universities and colleges approaches faith in a different way as far as the level to which a student’s education features religious study. Some colleges are affiliated with the Christian church only in name, and the student experience is highly secular in nature. Other colleges design their entire curriculum around faith-based study and Christianity.