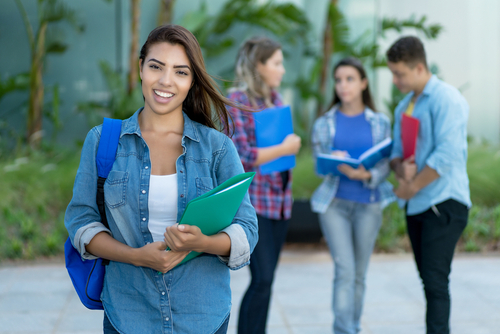 When searching for a future college, a student may ask whether it is more difficult to be accepted to a Christian college or to a public university. The answer is that it may be more difficult for some students than others. Universities base their acceptance standards on many criteria which impact the likelihood of acceptance.

Many Schools in the United States Were Once Christian

Most of the oldest universities in the United States were founded by religious organizations or were affiliated with Christianity in their earliest years of operation. As such, some of the most revered colleges and universities in the country are or were affiliated with Christianity. For example, Harvard University, which is considered the most prestigious and difficult university in the United States, was founded by a clergyman named John Harvard. Similarly, Princeton University was once meant to train ministers before the institution’s faculty began to focus on secular education and non-religious areas of study.

Conversely, some of the newest universities and colleges in the United States are Christian and intend for their students to enjoy significant academic rigor. For instance, recently founded Sattler College has hired faculty who have studied at institutions such as Stanford and Harvard.

College applications tend to require standard items like application fees, standardized test scores, and the official application. However, some religiously affiliated colleges may also request that students sign documents attesting to their faith.

Some Christian colleges may require that students confirm that they agree with the mission statement and standards of behavior published by the school’s trustees. A student who isn’t already part of the school’s faith may find it challenging to adhere to such standards. Brigham Young University, which is affiliated with the Church of Jesus Christ of Latter-day Saints, requires its students to follow the strict, Bible-inspired rules of morality and behavior.

General admission to many Christian colleges might not require extraordinarily high scholastic achievement. However, some schools may require that a prospective student is a member of the university’s faith. Membership may require baptism or other traditional rituals associated with Christianity.

According to an article published by Forbes, 25 out of 130 of the best schools in the nation are affiliated with the Christian faith. As ranked by Forbes, Christian schools at the top include Georgetown University, Boston College, and Notre Dame, among others.

Applying to Notre Dame, which is affiliated with the Roman Catholic Church, requires an application that is strongly competitive since the university accepts less than 20 percent of its applicants. Similarly, acceptance to Georgetown University, which is a Catholic Jesuit school, is tough, with the university accepting less than 16 percent of applications.

Related Resource: Top 10 Christian Colleges and Universities in the North

There are no absolutes when it comes to answering the question of whether it’s more difficult to get accepted to a Christian college than a secular or non-Christian college. Some Christian colleges do have very low acceptance rates and are quite difficult, but others offer open admissions policies. Prospective students interested in enrolling in a university affiliated with the Christian faith will want to research the academic qualifications required for each potential college or university as they would with any institution of higher learning.