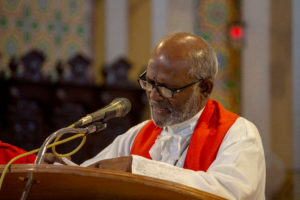 If you are contemplating going into Christian ministry, you may be curious about the differences of a pastor vs. priest. Though the two terms are sometimes used synonymously, there are differences in how they are typically used and understood which may be helpful to know if you’re considering pursuing a role in Christian leadership.

Differences in the Titles

The word pastor, as you might guess, is related to the words “pastoral” and “pasture.” As a title for a Christian leader, it simply means someone who shepherds or guides a congregation, providing for their spiritual nurture. In this wider sense, anyone who serves as the leader of a congregation can be called a pastor. Since the late 1800s, the word has even been in use as a verb. For instance, a Christian minister could say that he or she “pastors” a congregation. When it’s used not just in this general sense, but as a specific title, it’s generally used in Protestant churches.

The word priest has its origins in the Greek word presbyteros and the Latin word presbyter. It essentially means elder. It is typically used to describe a pastor or minister who serves in the Catholic or Greek Orthodox traditions. Anglicans, who have ties to both the historic Catholic Church and to reformed tradition, also use the word priest. A generally consistent way of looking at it is that a Christian leader tends to be called a priest if he or she serves in a historic Christian tradition that emphasizes liturgical worship, including an emphasis on the celebration of the Eucharist or Mass. It’s not quite as simple as saying Protestant Christian congregational leaders are called pastors and Anglican, Orthodox and Catholic ones are called priests, but that is part of the distinction. While a priest may be called a pastor, in the term’s general sense, most pastors are not called priests, according to Patheos.

Priests in the Greek Orthodox and Roman Catholic traditions must be male. Catholic priests must be celibate, though Greek Orthodox priests can marry prior to ordination, and Anglican priests, who can be either male or female within the American branches of the tradition, may marry.

Protestant pastors are not required to be celibate, but only some Protestant denominations ordain women as pastors. Much depends on a particular denomination’s history and practice. Educational requirements may also differ from denomination to denomination. Most long-established traditions, including the historical liturgical churches and mainline Protestant churches, require seminary training and a rigorous ordination process. Some smaller Protestant denominations, especially those based on a looser and less hierarchical structure, may not require seminary, though their candidates might be encouraged to attend Bible college. In some Protestant churches, you will also come across the term “lay pastor” which refers to someone who is not ordained but is serving a pastoral role in a congregation.

Dress tradition is yet another interesting and important area of distinction between pastors and priests. Priests are typically more strictly bound by Catholic tradition to wear a series of symbolic layers. Cossocks, ferraiolo capes, Greca overcoats, and clerical collars are among some of the most important garment elements for the priest, and each has its own, vital meaning for the church.

Pastors, on the other hand, do not wear these same items and are far less bound by any one set of garment rules. In some churches and Christian denominations, the pastor will regularly wear a robe along with numerous, other, various symbols of their particular church. In many other cases, pastors will simply wear common dress attire such as a suit, sport coat, tie, dress pants, and dress shoes. And yet others can be seen in jeans, T-shirts and sporting tattoos. Due to the variety of denominations across non-Catholic Christianity, there can be noteworthy variation in what pastors can be seen wearing at worship time.

One more interesting distinction that can be made between pastors and priests, and even their associated church bodies too, is that of the hierarchical epicenter. In Catholicism, the absolute epicenter of church organization and administration is located in Vatican City. Here, a pope and royal, holy structures and grounds make up the seat of the church.

The Association of Catholic Priests is a leading organization that binds all participating priests in a very valuable, resource-filled network of other priests and Catholic components.

The Association of US Catholic Priests is another, major representative force in Catholicism and greater priesthood that provides networking, resources, relevant news, links to important events, and more.

The National Association of Christian Ministers is a leading group serving the greater pastoral community in the United States specifically. Here, members and others can find a rich array of resources, information contacts, news, and more.

The American Pastors Network represents yet one more, excellent and very authoritative organization for the whole of the pastoral world. This group provides a notably large networking experience, video and radio media products, up-to-date news pieces, and plenty more. All media programing from the website can also be easily accessed in mobile format with the organization’s “Stand In The Gap” mobile app.

Though the terms pastor and priest are not entirely interchangeable, they are related, and both refer to Christian leaders. Ultimately, the very common questions regarding “pastor vs. priest” subject matter might be best understood within the context of a particular Christian tradition.