What Pope Francis Gets Right

He wants church doctrine to draw people towards God instead of casting them away in shame.
• He wants to open up Communion to divorced and remarried Catholics.
◦ “I think this is the moment for mercy.”
• He approves of baptizing babies born out of wedlock.
◦ “This is not good pastoral zeal, it distances people from the Lord and does not open doors. So when we take this path…we are not doing good to people, the People of God.” (May 25, 2013)

He cares about the physical needs of the financially poor.
• He invited 3 homeless men into the Vatican to share a birthday breakfast with him. (December 17, 2013)
• He invited 200 homeless people to dinner at the Vatican. (July 1, 2013)
He’s not afraid to tackle economic policies that he thinks perpetuate injustice.
• He denounced inequality of trickle-down economic theories of capitalism. (November 26, 2013)
• He warns that the “idolatry of money” can lead to a “new tyranny.”
◦ He wrote, “How can it be that it is not a news item when an elderly homeless person dies of exposure, but it is news when the stock market loses two points?” (November 26, 2013)

His heart breaks for the downtrodden.
• He not only acknowledge but also embraced and kissed a deformed man who suffers from neurofibromatosis. (November 6, 2013)
• He washed the feet of 12 criminal offenders including two women and one Serbian Muslim. (March 28, 2013)

He doesn’t take himself too seriously.
• During a Pontifical Council he allowed a child who wandered on the stage to sit in his chair. ( October 26, 2013)
• He caused a commotion when people saw him carrying his black bag as he walked toward his flight in Brazil. (July 22, 2013)

He emphasizes people over hot-button issues.
• He thinks it’s unnecessary for the church to always focus on abortion, gay marriage, and contraception. (September 19, 2013)
• He said he would not judge a priest on his sexual orientation.
◦ “If someone is gay and he searches for the Lord and has good will, who am I to judge?” (July 29, 2013)
• When asked if he approved of homosexuality, he replied with another question: “`Tell me, when God looks at a gay person, does he endorse the existence of this person with love, or reject and condemn this person?’ We must always consider the person. Here we enter into the mystery of the human being.”

He strives for a simple life.
• When possible, he chooses modest cars like a Ford Focus over the Papal fortified Mercedes.
• He chose to live in a building reserved for visiting clergy and lay people instead of the plush papal quarters.
◦ “I’m visible to people and lead a normal life. All of this is good for me and prevents me from being isolated.”
• Prefers to wear more humble attire. Francis is keeping his black shoes, foregoing the red cape popes usually wear, and chooses to wear his regular black pants under the robe. He’s also keeping the iron-plated pectoral cross he used as archbishop, and his papal fisherman’s ring isn’t gold but gold-plated silver.
He takes risks to care for the poor.
• Sometimes he dresses up like an average priest and sneaks out to give money to the poor living on the streets of Rome.
• He visited the violent slums of Rio de Janeiro and gave an inspiring speech.
◦ “No one can remain insensitive to the inequalities that persist in the world! No amount of peace-building will be able to last, nor will harmony and happiness be attained in a society that ignores, pushes to the margins or excludes a part of itself.” (July 25, 2013)

He humbly admits that he does not have all of the answers.
•  When asked to describe himself he said, “I am a sinner.”
• “The great leaders of the people of God, like Moses, have always left room for doubt,” he said. “You must leave room for the Lord.”

He wants to redistribute the power of the church.
• On January 12, 2014 He chose his first group of Cardinals to reflect his belief that the church must pay more attention to the poor. The 19 men are from Asia, Africa, Latin America and elsewhere, including the developing nations of Haiti and Burkina Faso.
What’s in a Name?
Born Jorge Bergoglio, he took the papal name of Francis in honor of a 13th century monk named St. Francis of Assisi who was raised in a wealthy family but gave up worldly goods and lived a life of poverty.

O Divine Master,
Grant that I may not so much seek
To be consoled, as to console;
To be understood, as to understand;
To be loved as to love.

Why is Pope Francis So Different from His Predecessors?

• He is the first Pope who is a Jesuit Priest.
◦ Jesuits are known as a “Society of Jesus”
◦ In addition to promoting education, they practice Ignatian Spirituality which sees God in all things and all people. This causes them to fight for social justice.
◦ St. Ignatius told his followers to not seek high clerical office in the church. This influence undoubtedly shaped Pope Francis to wear his role with much humility.
• He is the first Pope from Latin America.
◦ Latin America is one of the world’s poorest regions. His proximity to poverty undoubtedly influenced him to be an advocate for the downtrodden.
◦ Every Pope for the last 1,272 years has been from Europe.

Five Fun Facts About Pope Francis:
• He cooks his own meals.
• In his youth, he enjoyed dancing the tango with a girlfriend.
• He trained as a chemist.
• He speaks Italian, German and Spanish fluently, in addition to a smattering of English, French and Portuguese.
• He worked as a bouncer in a Buenos Aires bar to earn money as a student. 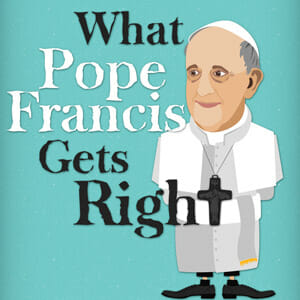